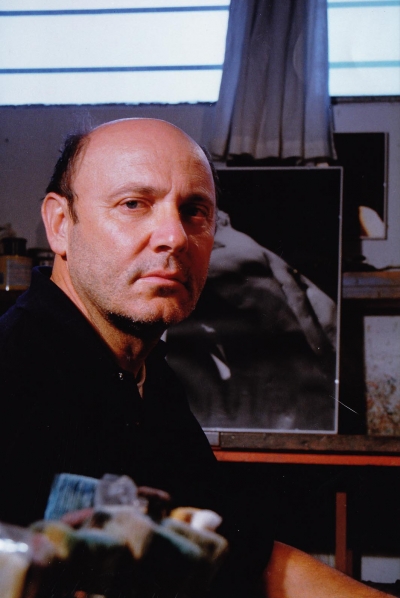 Salvatore Magazzini was born on February 28th, 1955, in Pistoia (Italy), where he presently lives and works.
His first exhibition is dated 1969. Now his works are present in major collections in Italy, Switzerland, France, United States, Germany, Japan, Morocco and Colombia.
Since 1991, he is present in the "PRANDI" international catalogue of Reggio Emilia and in some of the most prestigious Italian auction houses:
Pace Milano,
Pananti Firenze,
Fidesarte Venezia
Finarte, Milano
Finarte, Roma
Farsetti, Prato
Meeting art, Vercelli,
Pandolfini, Firenze.

Mario Luzi
The paintings of Salvatore Magazzini surprise like something familiar but still unexpected. He is able, like very few painters of the nineteen hundred, to combine vision and structure. Therefore, I observe with real pleasure his landscapes, based on a solid representational element but still influenced by the artist’s imaginative approach, able to transform them. To transform them, but without betraying their authenticity. Like that, the viewer can still enjoy their reality. An art that is clear, solid and convincing.

Antonio Del Guercio
… He has also identified a significant element of connection - in oil painting - between texture and the use of light. In his watercolors instead, he completely abandons any figurative element, and light and color are used in their total purity…

Edoardo Bianchini
...It was instictive for him to paint on the linen sheets that his mom would give him. The same instinct that - according to me - followed him throughout his artistic development. Until we arrive at his complete and mature works. In front of these, I still feel the pleasure of enjoying his sense for color; fundamental element of an art based on immediacy...

Carlo Pepi
…I had been attracted by the personality that this artist was able to convey in his landscapes, that, at first glance would appear more like a product of a dream, rather than a representation of reality. But, after a more careful analysis, I would come to the conclusion that what was described in these paintings, was reality: the reality of Salvatore Magazzini…
© 2022 Per informazioni telefonare al: +39 338 4007273 - oppure scrivere a: magazzini@tiscali.it - P.i. 01425780473 [angiolini]